RESEARCH AND INNOVATION SINCE 1949

Ezio Cristina founded CRISTINA Rubinetterie in Gozzano, Northern Italy, in 1949. The development of the company closely followed the route laid out by the founder until the arrival of his sons, Alberto and Riccardo, who drove the company towards transformation on an industrial scale. At the end of the 1980s, the acquisition of SILFRA takes place, a company specialising in the production of soil pipes, electronic and time-controlled taps and fittings. With this expansion, CRISTINA Rubinetterie moves further into the industrial sphere, strengthened in June 2017, when the brand became part of the Caleffi Group, a leader in the manufacture of heating, air conditioning, plumbing and drainage parts. Through this partnership, CRISTINA secured both the continuity of the brand and its growth at an international level. Additionally, 2017 saw the launch of an exclusive showroom space in Milan. Cementing the company’s public image, it became a place to enter into dialogue with a creative community of designers and architects, conduct business and design meetings and host a vast array of events.

CRISTINA Rubinetterie was among the first to introduce the thermostatic mixer to Europe in 1968 and to propose an extensive range of 100 surface colours. Leading the way once more, the company was also the first in the world to introduce the single lever mixer in the 1980s. In 1994, the decision to produce single lever mixer cartridges, an important investment in technology, allowed a high degree of safety in the control of the production process and in the quality of the products themselves. Similarly, the use of stainless steel (guaranteed by a Centro Inox quality mark) was introduced in 2003, with the company dedicating an entire division to the material. The expansion of the Gozzano logistics centre followed in 2007, housing a fully automated warehouse. Today, with four production sites located in the upper area of Novara, totalling 35,000 square meters, with employees numbering over 250, CRISTINA Rubinetterie continues to operate a completely Made in Italy production. The export turnover share exceeds 60% and the company is present in over 60 countries. CRISTINA is a member of the Green Building Council Italia that uses the Leed rating (Leadership in Energy and Environmental Design) as an evaluation system of the sustainability of buildings.

In 2020, CRISTINA Rubinetterie renewed its strategy, focusing on the company's path in the coming years, orientating it towards design, wider project work and the hotel sector. In addition to a diversified range of products across its catalogue, the company confirms the development of tailor-made solutions (in terms of dimensions, finishes and types of use) to meet varied design requirements. The range, intended for bathrooms, kitchens, wellness centres and outdoors, is designed to be functional, durable and aesthetically in line with contemporary interior design projects.

The logo, with its shape, colour, symbol, is the identification card of a brand. It holds and conveys the founder's Ezio Cristina ideas and values; it tells the story of the company, identifies its mission along with the entrepreneur vision.

The internal R&D department, designing solutions and products present across the world.

We operate locally to be present globally. 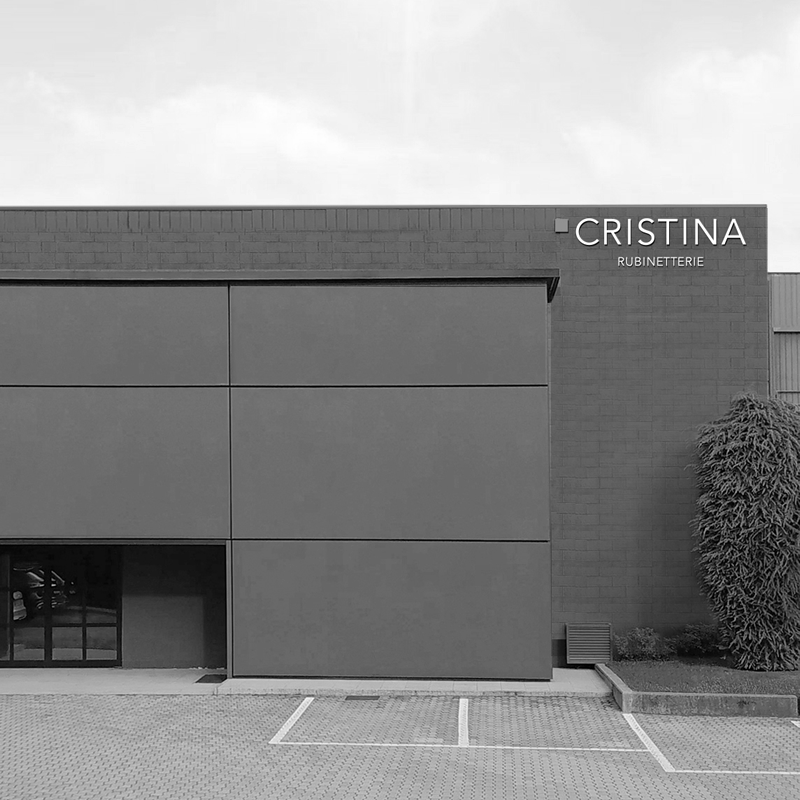 Headquarter
THE FULCRUM OF OUR ROOTS

Discover more
Subscribe to the Newsletter
Subscribe to the newsletter to stay updated on product launches and brand news.
close
This website or its third party tools use cookies, which are necessary to its functioning and required to achieve the purposes illustrated in the cookie policy. If you want to know more or withdraw your consent to all or some of the cookies, please refer to the cookie policy. By closing this banner, scrolling this page, clicking a link or continuing to browse otherwise, you agree to the use of cookies..